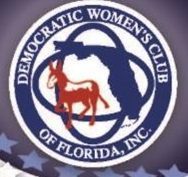 Yesterday, ignoring the demands of thousands of citizens of Florida asking for the ban of assault weapons, the Florida Senate Rules committee pushed a Bill #7026 to arm teachers to the Appropriations Committee in a very partisan vote.

Over a thousand of Florida’s citizens came by buses to call for common sense gun reform which would ban assault weapons, bump stocks, and high round magazines. The citizens filled the committee room and overflow rooms while they watched their eloquent pleadings fall on the polite, but deaf ears of the committee. The only voice the committee seemed to hear was that of Florida NRA lobbyist Marian Hammer, who was acknowledged by name and allowed to approach and speak more than one time on the issue.

The Democratic Women’s Club of Florida stands with the citizens of our state who want common sense gun reform and against arming classroom teachers.

Yesterday, when word got out of this quickly devised Public Safety Act, the Florida Senate and House Democrats responded by having a press conference begging for common sense gun reform which would include the banning of assault weapons. As your club President, yesterday I personally visited the office of every Republican member on the Senate Rules committee and explained our position on this matter before that committee hearing began. Common sense gun reform does not include arming classroom teachers.