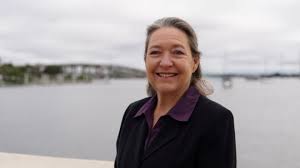 Joanne Terry wants to bridge the divide that has overtaken American politics. The longtime space industry engineer from Satellite Beach is running as a Democrat against Bill Posey for the U.S. 8th District congressional seat. The DWC does not endorse any candidate prior to the Florida primary election. To date, Terry is the only Democratic candidate running for Posey’s seat.

The moderate Democrat said she is not happy with how toxic our politics have become.

“We’re in a cold war right now for the soul of our district,” she said.

But Terry has faith that finding common goals between Democrats and Republicans is possible, if we take time to talk with each other.  Terry listed her top priorities as economic recovery from  Covid, the Indian River Lagoon, infrastructure and restoring civility to politics. The Republicans have gotten loud, the candidate said, so her campaign battle plan is to get loud, too. We “can’t get attention until we generate attention.” Ways to get loud include letters to the editor, ballot petition signatures, contributions and social media.

“I know it’s hard to keep the faith as a Democrat in this district,” Terry said. “I know our district is worth fighting for.”

For more information, go to Joanneterry.com.