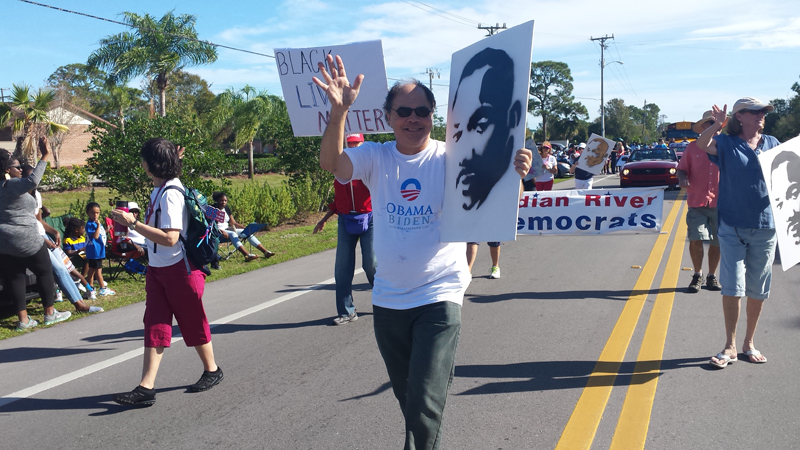 The Democrats of Indian River — the Democratic Executive Committee, the Democratic Women’s Club, and the Florida Young Democrats — proudly marched in today’s Martin Luther King Parade honoring the life of Dr. King with school children, faith leaders, congregations, fire and law enforcement, and county representatives.  With the citizens of Gifford and others lined on both sides of 45th Street and 43rd Avenue, marchers shared words of equality, faith, hope, and love as they held signs and talked with the members of the crowd.

Celebrating the anniversary of Dr. King’s birthday, we honor his beliefs that all people have value and deserve to be treated with dignity and respect without regard to race, religion or economic status.  Kim Lorimier, Chair of the Democratic Executive Committee of Indian River County, reinforced his vision stating,

“For Democrats, we recommit ourselves to the causes Dr. King stood for that are as relevant today as they were fifty years ago:  voting rights, health care, human rights, police and community relations, criminal justice, and economic opportunity.”

When President Ronald Reagan proclaimed the first MLK federal holiday in 1986 he said,

“It is a time for rejoicing and reflecting. We rejoice, because in his short life Dr. King, by his preaching, his example, and his leadership, helped to move us closer to the ideals on which America was founded.”

The Democrats of Indian River believe in America’s ideals.  We believe in Dr. King’s dream and his call to action,

And, as former President Bill Clinton reminds us today in working toward Dr. King’s Dream,

The Democrats of Indian River are working for our working families and preserving Democratic principles.