Today, despite historic participation by Florida voters in the 2020 Election, Governor Ron DeSantis suggested that he now wants to implement sweeping reforms to our vote by mail system to disingenuously protect the “integrity of our elections”  here in Florida. These remarks come on the heels of a Republican bill that was addressed this week in committee in the State Senate, which aims to purge former vote-by-mail requests and functionally make it harder for people to vote by mail — an anti-democracy bill which DeSantis promised to sign during today’s press conference.

“Why do Florida Republicans want to limit vote by mail access? Well it all comes down to who has access to the franchise.” said Florida Democratic Party Executive Director Marcus Dixon. “So even though the vote by mail system worked well here in Florida this past election, any time too many people have easy access to the ballot box, Republicans feel like they need to change the rules.”

“These remarks by Governor DeSantis and his fellow Republicans make clear that they are more interested in holding on to power at all costs than ensuring fair access to our democracy. They want to limit vote-by-mail because they know that more people voting threatens their power, so they are turning back to the Trump Republican authoritarian playbook: voter suppression and incendiary rhetoric about election integrity.”

See Also:
Miami Herald: Voting by mail in Florida was a success, so why do legislators want to make it harder?
Mary Ellen Klas | February 17th 2021
Prev post 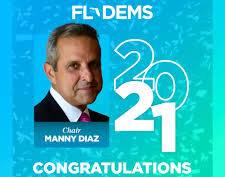