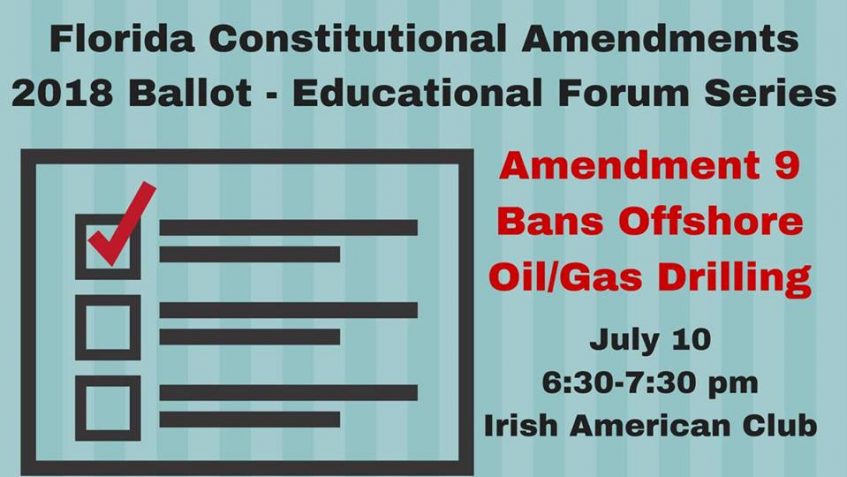 In June, the Florida Young Democrats of Indian River launched an informative Amendment Lecture Series for residents of Indian River County. With numerous constitutional amendments on the 2018 ballot, this series aims to unpack on the second Tuesday of every month and explain each one so voters can be informed at the polls.

The series began on June 12, with Amendment 4, the Voting Rights Restoration for Felons initiative.  The amendment initiate was led by Floridians for a Fair Democracy and Florida Rights Restoration Coalition (FRRC), which gathered more than 700,000 signatures to qualify on the 2018 ballot.  More than 30 people attended, and guest speaker and local FRRC director Dr. Elizabeth Jackson summarized the efforts of the FRRC throughout the state of Florida. In addition, a returning citizen spoke personally to the effects of lifetime disenfranchisement.

On July 10, the Florida Young Democrats will host guest speaker Paul Laura of the Democratic Environmental Caucus to discuss Amendment 9, Prohibiting Offshore Oil and Gas Drilling. Amendment 9 would prohibit drilling for the exploration or extraction of oil and natural gas beneath all state-owned waters.  Environmental groups believe this measure will protect our fragile marine systems and are encouraging citizens to vote yes on Amendment 9.

In addition, Amendment 9 adds use of vapor-generating electronic devices to current prohibition of tobacco smoking in enclosed indoor workplaces.

The August 14th series lecture will break down Amendment 8, School Board Term Limits, with IRC School Board Candidates Stacey Klim and Mara Schiff.